After a summer of having lots to write about, I haven’t had as much to blog about in the last few weeks. To be fair, this hasn’t stopped me in the past, so here’s what I’ve been up to.

I’ve been working a lot both in my studio and on education projects and I seem to be having a lot of early mornings and late nights. I’m finally at a point with my collograph prints of objects where I have an idea of what they’re about and how I want to show them. I had six of them framed, a precipitate decision given that I haven’t got any fixed plan to exhibit them at the moment, and one that prompted a dogged debate on art and the economics of the contemporary art market between Matt, Albert and me. Their point was it would have been more sensible to wait but who wants to be sensible when the other option is a print of a folded page sitting behind low reflective glass. 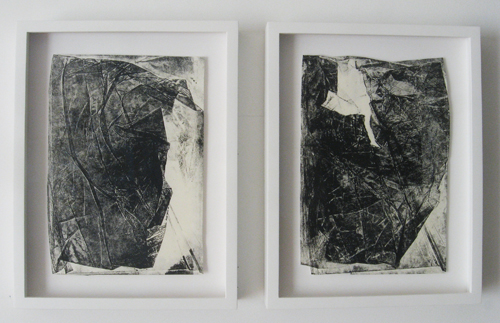 When asked, I usually talk about these works in terms of how I make them and how it compares to traditional printmaking, but I’m actually far more interested in the way that they describe the objects themselves and the details of creases and tears from how it has been used. I’m still printing my sweet wrappers and I’m finding ways to pull out these details more than ever before. The lovely people at A.Bliss mounted two of these onto museum board a couple of weeks ago and in the next week or so I will mount the rest for a series of multi-panel and multi-hued works. Axisweb have also just launched a shop on Culture Label and they have invited me to sell an edition of these this Autumn.

The last two weeks has also been the start of Ideas for Experiments, a project for primary schools that I’m leading with Judith Brocklehurst at the Camden Arts Centre. We planned this term’s project entirely around experiments to do with weight and in the first workshop we asked students to draw with charcoal, graphite, felt tip pens and other things and use scientific scales to investigate the weight of these marks. For our second workshop last Tuesday, Judith built a large see-saw, which we used to weigh all the objects in the drawing room at the gallery. I appreciate that the science is elementary, but it was still completely awesome to me when the end that was loaded down with bags of sand, rose and hovered in the air, because we had managed to attach various chairs, boxes and two tubs of powder paints to the other side.