I realise that I should have blogged this earlier but The Sketchbook Project World Tour is in London and at Canada Water Library until the 19th October. Charlotte and I both made a book for this earlier this year (more here) and Charlotte, Dave and I went on Monday to the library to check them out, literally, and stayed to have a look through some of the other 1,000 plus sketchbooks that were there.

This page comes from Charlotte’s sketchbook, which last time I forgot to scan (or as Charlotte would say: I ‘forgot’ to scan) and which I remembered as being drawings of clowns. So much for my visual memory. 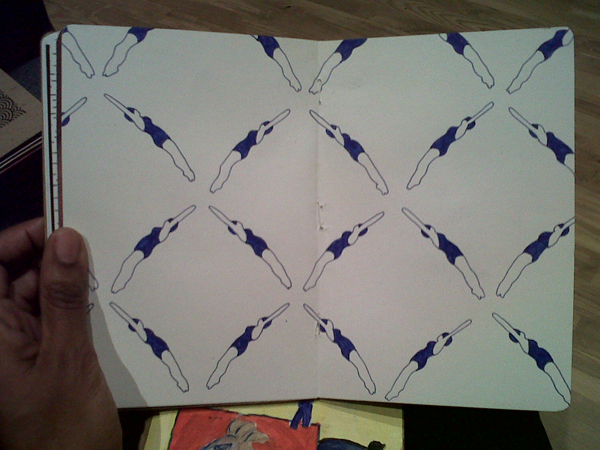 It’s really easy having a look through. All the sketchbooks are laid out in the lecture theatre and you choose a sketchbook by searching the database under name, theme or media. This is then brought over to you with a second book that is selected at random. As you can imagine what you get is pretty unpredictable and we waded through some deeply idiosyncratic stuff but along with that there was some immensely satisfying drawing and some cool collage and I would highly recommend it. This was one of my favourites but there were many others.