I realise that I am overdue for a blog about my residency in Suffolk, but since I’ve got back, preparations for the Islington Exhibits exhibition hasn’t stopped, and it has only been today that I managed to stick up some photographs and drawings on the wall in my studio, and scan in the pages of my sketchbook.

The residency was from start to finish absolutely brilliant. Fran Crowe, despite being busy installing her own show, met me at the station and I had dinner with her and her family the first night. Bill, her partner, works in coastal conservation, and I went dog walking with them along the coast and we talked about shingle beaches, and coastal vegetation, while collecting plastic litter for her work. One of my favourite parts of the residency was listening to Fran and Bill talk about the coast and their experience of it.

I wasn’t sure before I left what I was going to find, or what I would make with what I found, so I decided to make everything an experiment. I was pretty certain that I would get lost and when I got lost, neither the compass that I borrowed from my mum or the OS map that I borrowed from Fran, would be much use. I did get lost pretty much every day, but with the exception of a few harrowing moments when I was getting stalked by some pigs, the OS map turned out to be very useful, particularly when I stopped using the compass. The fact that I had to borrow almost everything for the trip indicates my general lack of outdoorsiness. So I carried my art materials in my sister’s boyfriend’s rucksack, wore my sisters’ lightweight coat and rode around on Fran’s son’s bike. I was certain that I wouldn’t cycle on any B-roads as I did my first wobbly circuits in front of the studio, as I was certain I would fall off. I was wrong about the first and right about the second, but I got back on and was not much the worst for that either.

I walked through massive fields planted with leeks and barley and took a boat trip to Orford Ness, an ex military base that is also a shingle beach and a Site of Special Scientific Interest. I drew loads and as everything was new to me, most of my drawings are about me trying to figure out how things grew and being completely amazed by how they grew (you can view my sketchbook online here). I took four rolls of film, which I got developed this week and here is a flavour: 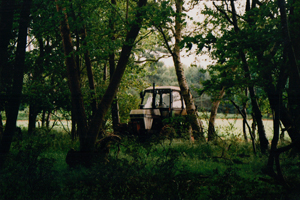