It is only a coincidence that they rhyme 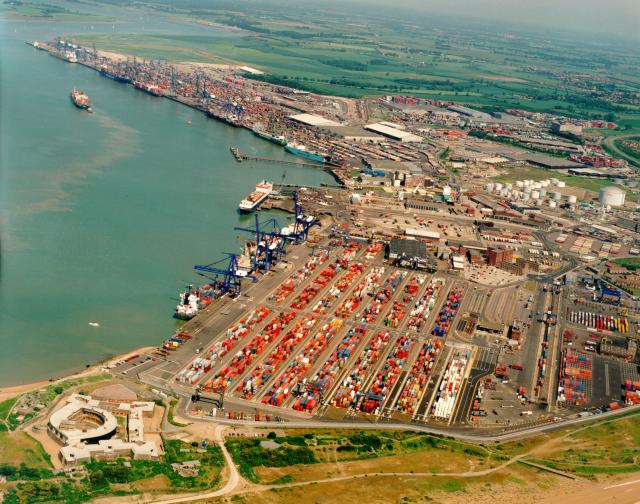 The Circus was an exhibition of drawings and scaled objects at Landguard Fort that I made in response to the dock and the ships at the port of Felixstowe. From the start,  I wanted to make work that seemed larger that large and to use a sense of unreality to talk about the other-worldliness of the port and the structures that sat around it, and in the end I made work that was very specific and personal.

The works in the exhibition seemed to draw out, and be informed by, qualities within the building that went further than my first impressions of the contrast between old and new or large and small. I found out that the sight-size drawings of cranes and container ships, made outside on the peninsula, were the same size as the peeling paint and crumbling plaster in the fort. The black vinyl lettering that I scaled to match the height of a container box reflected and caught the daylight, but as it was colourless, it also made the faded walls appear more vibrant and in the vaulted space the size was deceptively small.

The letters placed flush against the floor and against the wall meant it was hard to see what it was made of before you got very close. They were described to me by another artist as a drawing, which I like for perhaps obvious reasons, and I think this echoes something for me about the nature of seeing and illusions and the incorporeality of sight. I found that both works were much more about how we looked than what was looked at, and I found that the way that looking was staged and described in my work seemed to reflect and highlight all the other forms of viewing that were happening around the fort, from the coastguard, port operators and ship spotters, to the visitors walking around the fort, itself a building of exceptional interest, sited five hundred years ago on the perfect spot for looking.